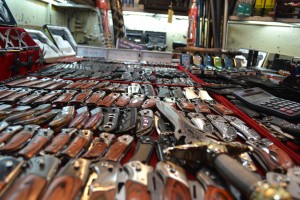 CHIANG MAI, Thailand—The Chiang Mai night bazaar  is a good place to buy a light-brown Chang Beer tank top for $6.  There are also numerous silk robes for sale in the same price range, in case you’re looking for something more modest.

If you fancy neither of these items, then you can choose from the following: fake Rolex watches, ostrich-leather wallets (I have two), knock-off Tiffany jewelry, statues of the Buddha, cowboy hats, necklaces, flower-shaped lampshades, boxing shorts, or if you want to drop out of reality for a few weeks, the entire series of “The Sopranos.”

I walked through hundreds of these stands last night, buying nothing, until eventually I stumbled onto a cart stocked with an armory of knives, swords, throwing stars and machetes run by a very small man who drives a hard bargain and rarely tells the truth.

I had already been burned by buying counterfeit knives once on the Thailand-Burma border, where I bought a fake Dark Ops Stratofighter Stileto for $15.  For this reason, I wasn’t particularly interested in buying any pocket knives, especially after the merchant selling them told me that a Browning pocket knife, which had USA clearly written on it, was produced in a village 10 km away.

The samurai swords looked just as suspect.  The blades were dull, they were shorter than I expected and the prices were suspiciously cheap.  I checked out a few machetes, all of which I was assured were also made in Thailand.  They didn’t look half bad, but there was nothing spectacular about them, so I decided to pass. 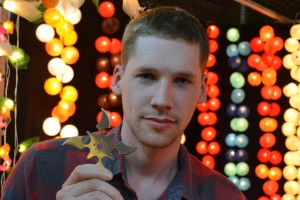 Despite what appeared from the street to be a cache of crazy Asian weapons, the inventory in the cart was quite tame.  Considering I had photographed many of the knives, asked numerous questions and even forced the owner of the cart to take an incredibly awkward picture with me, I felt I should purchase something.

There were some Chinese-made throwing stars that looked kind of groovy and after a fierce negotiation session, during which I was often worried I would be sliced to pieces, we settled on 5 bucks.  So, now I have a throwing star and a fake Dark Ops knife sitting in my drawer.

Yet, despite my continuous failure at finding any authentic knives in Asia, I still have optimism that my luck will soon turn.  Thailand’s a big country and my assumption is that most of the really cool knives are in the rural areas.  Of course, that’s not to say I won’t be returning to the night bazaar. There’s a plethora of random stuff to buy there, plus, can you ever have enough Chang Beer tank tops?