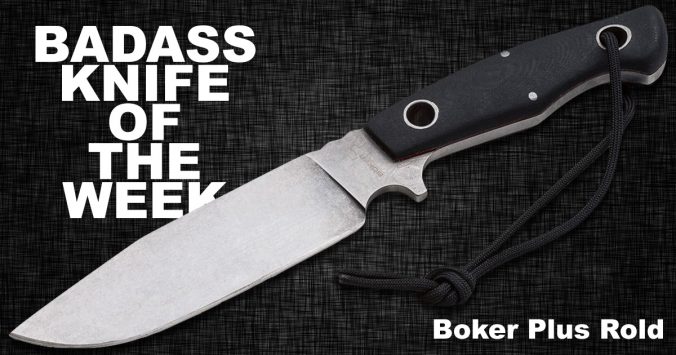 Boker Plus Rold – Badass Knife of the Week

Jesper Voxnaes is one of the hottest knife designers around. He’s best known for his intuitive folders and small fixed blades that are simple and functional. In our latest Badass Knife of the Week, Voxnaes focused on putting his signature design elements on a large fixed blade.

Voxnaes’ attempt at making a functional outdoor knife culminated in the popular Boker Plus Rold fixed blade. Coming in at an overall length of 11 inches, the large camp knife has so much going in its favor.

The 6.2-inch blade is thoroughly considered for maximum usage. The blade boasts a flat grind that cuts like no one’s business while the drop point profile offers superb versatility. Despite its large blade, Voxnaes gives more control to the user with a finger choil that allows you to choke up on the blade for finer tasks.

D2 is a less common but great blade steel for outdoor knives because of its toughness and ability to hold an edge.

The full tang construction is sandwiched between two black G-10 handle scales. Rivets in the handle help reduce the overall weight of the knife to a reasonable 10.3 ounces while also doubling as a lanyard hole.

Red fiber underlays add a little color and personality to the knife as well. The knife comes with a Kydex sheath, belt adapter, and lanyard.

Voxnaes hit out of the park with the Rold. Due to its popularity, the Rold is also available in a smaller Rold Scout version and with Micarta in the Rold Black version.

For more info on this Badass Knife of the Week, see the product page for the Boker Plus Rold.

How to Stop Losing Your Swiss Army Knife