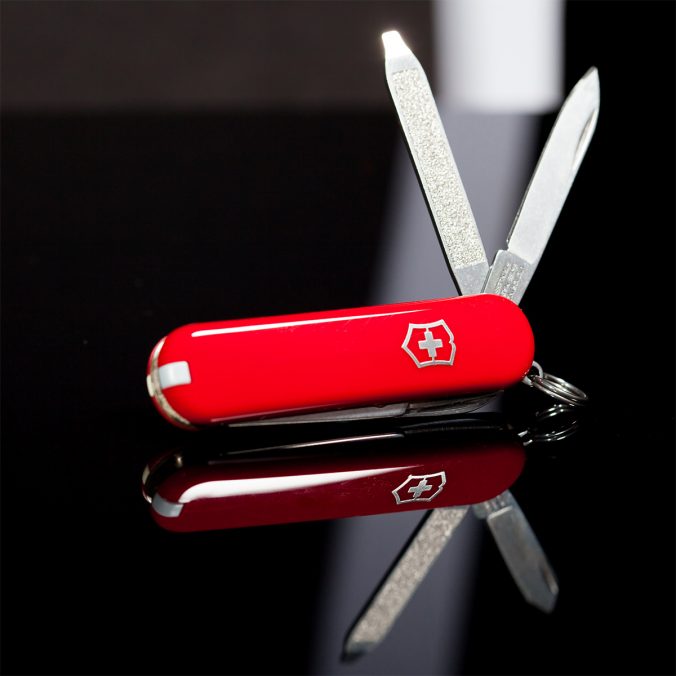 We’re continuing our trek through the best knives for each brand. It’s time for Victorinox to step up to the plate. After Wenger closed down for good and was acquired by Victorinox, the Swiss knife company is the definitive maker of the Swiss Army Knife.

Boasting more than 13 decades of existence, the knife company has continued to evolve and bring hundreds of different SAK designs. Narrowing down the 10 best is kind of a fool’s errand simply because there are so many options that you can get the exact model you like.

Still, there are a few standout models that showcase the best Victorinox has to offer. 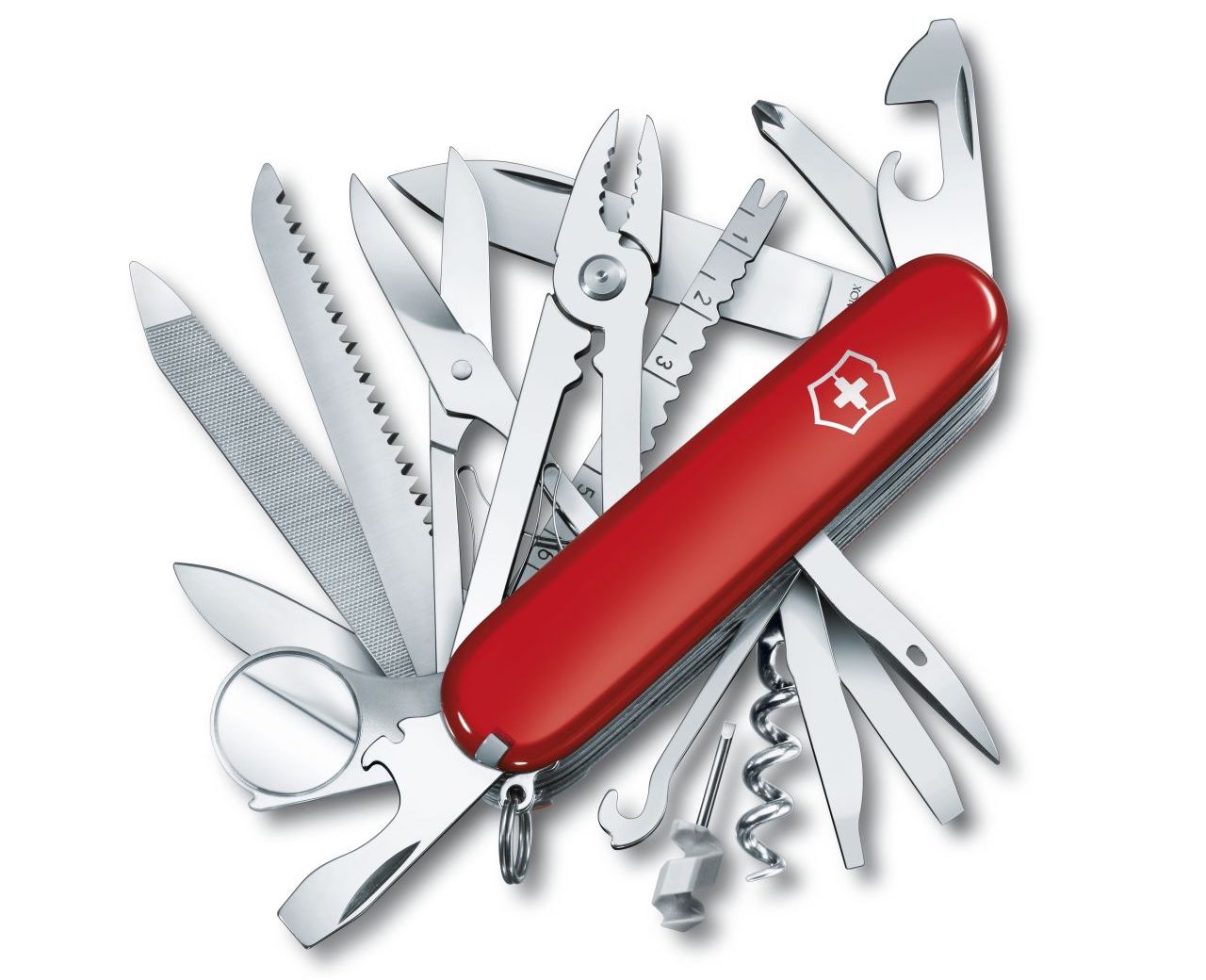 We’ll start with the company’s flagship model — the SwissChamp. In terms of actual carrying, the SwissChamp is far from the best. But it allows Victorinox to showoff its knife-making prowess. It has eight layers with 33 functions that range from a magnifying glass and saw to fish scaler and pliers.

Even though it’s not meant for EDC, this is a knife you can conceivably carry in your pocket or on your person without feeling insane. 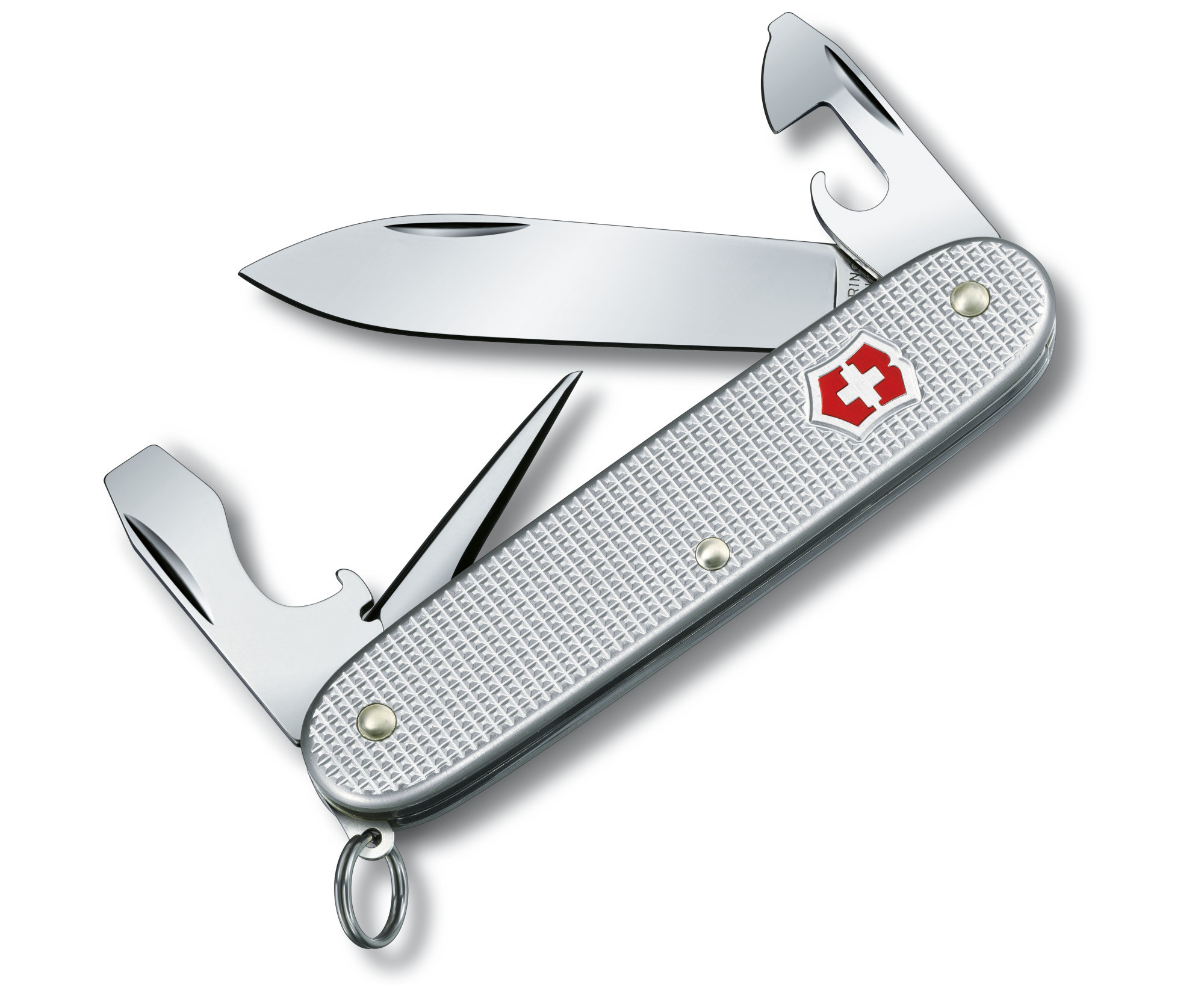 The Pioneer is the civilian version of the Soldier, which is considered the “true Swiss Army Knife.” The only difference is that it adds a keyring. Unlike many of the other SAKs on this list, the Pioneer features handsome Alox scales that give it a different look and feel. The tools are pretty pared down with only eight functions, such as a large blade and reamer.

The knife comes in a few different colors in limited editions. The Pioneer X is also available, which adds scissors to this model. Another popular model that was just left off this list is the Farmer, which is the Pioneer with a wood saw. 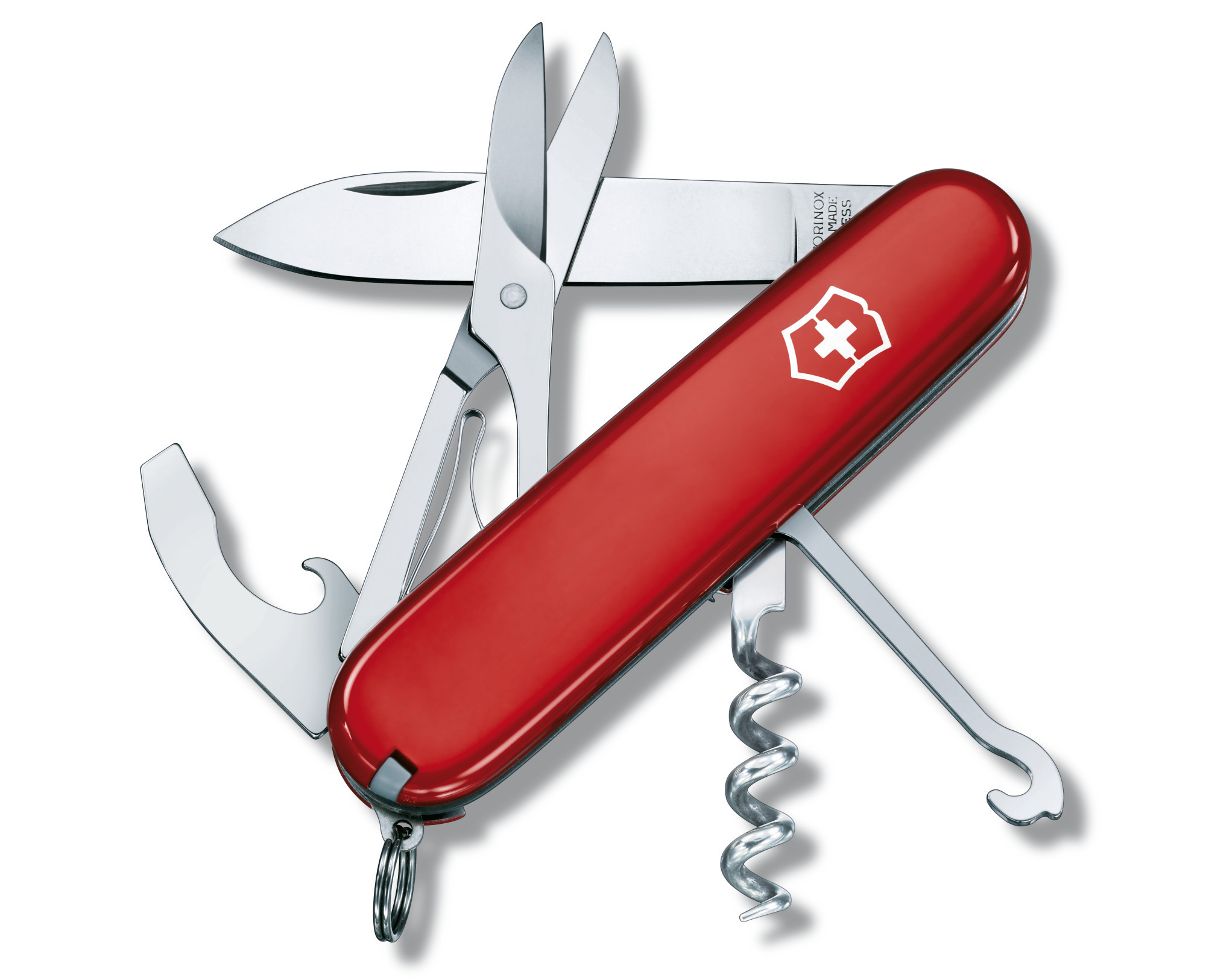 The Compact is a personal favorite and one that I carry every day. This is one of the most compact versions of the SAK to have the most amount of functions. The reason? It’s the thinnest SAK to have plus-scales (with a pin, pen, toothpick, and tweezers).

What I love about this model is that it’s optimal for city use. I use the pen all the time as well as the scissors. The combo tool fits a cap lifter and opener into one and the large blade is the perfect size for most tasks. The hook is a bit useless and the best part of the corkscrew is its ability to hold the mini screwdriver, but this is one of the best small SAKs out there. 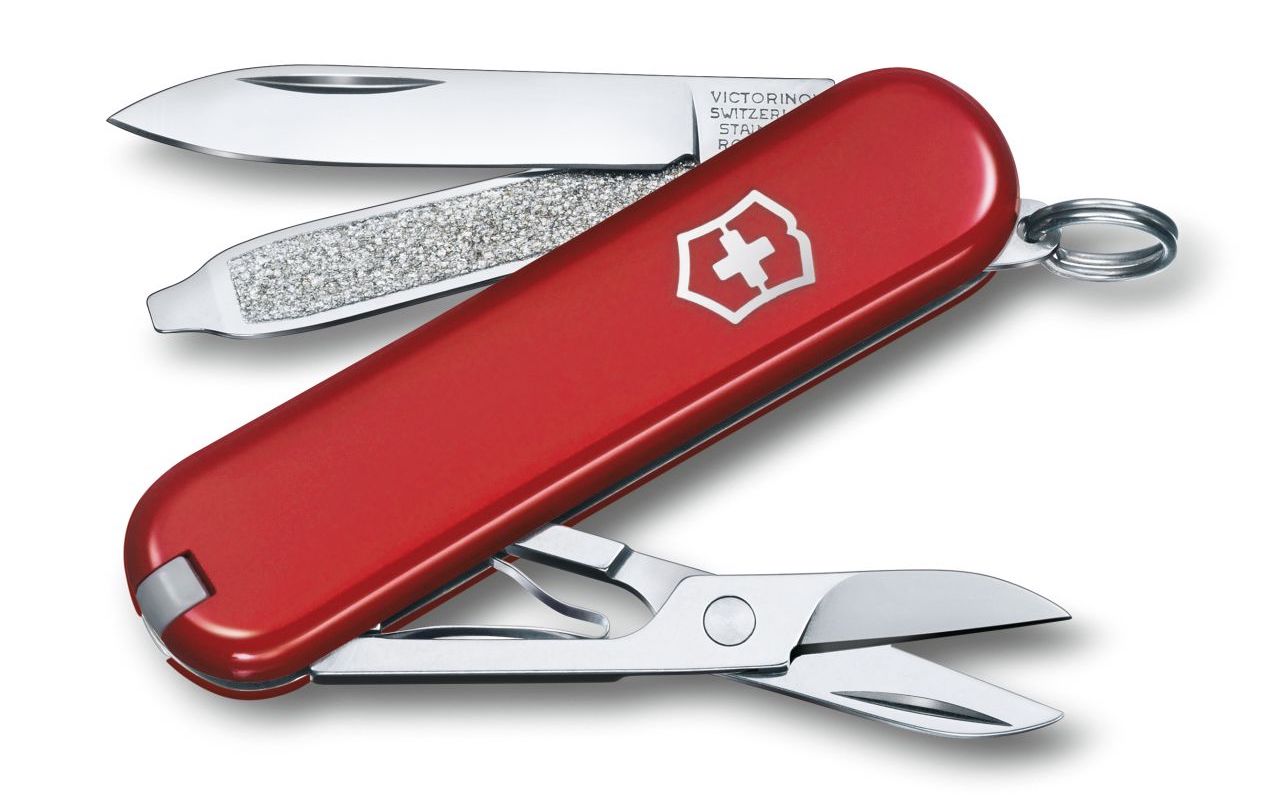 If you want something tiny, the Classic SD is your best bet. This model may very well be the best-selling knife on Earth. It is small and simple and fits right on the keychain. It has a small blade, nail file, scissors, toothpick, tweezers, and a keyring. In terms of SAKs, there’s not much more you need than this knife.

The best part is that it comes in tons of variations, from giraffe and US flag scales to Alox and barleycorn sterling silver. 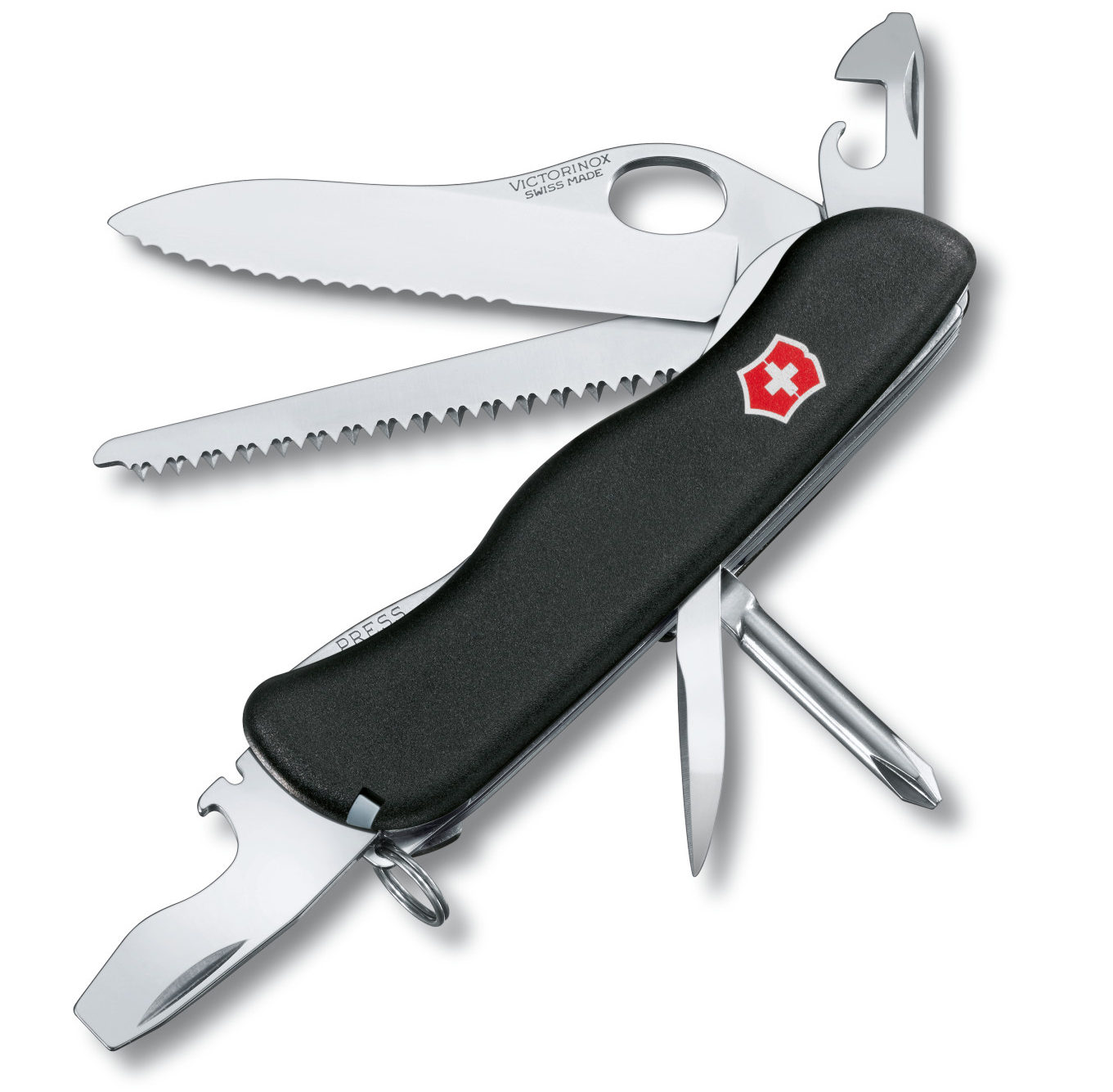 I like to say this isn’t your granddad’s SAK because it doesn’t look anything like a traditional SAK. It has a liner-locking blade that opens up with one hand, a locking cap lifter/screwdriver, and nylon scales. The knife is an excellent and hardworking Swiss Army Knife. 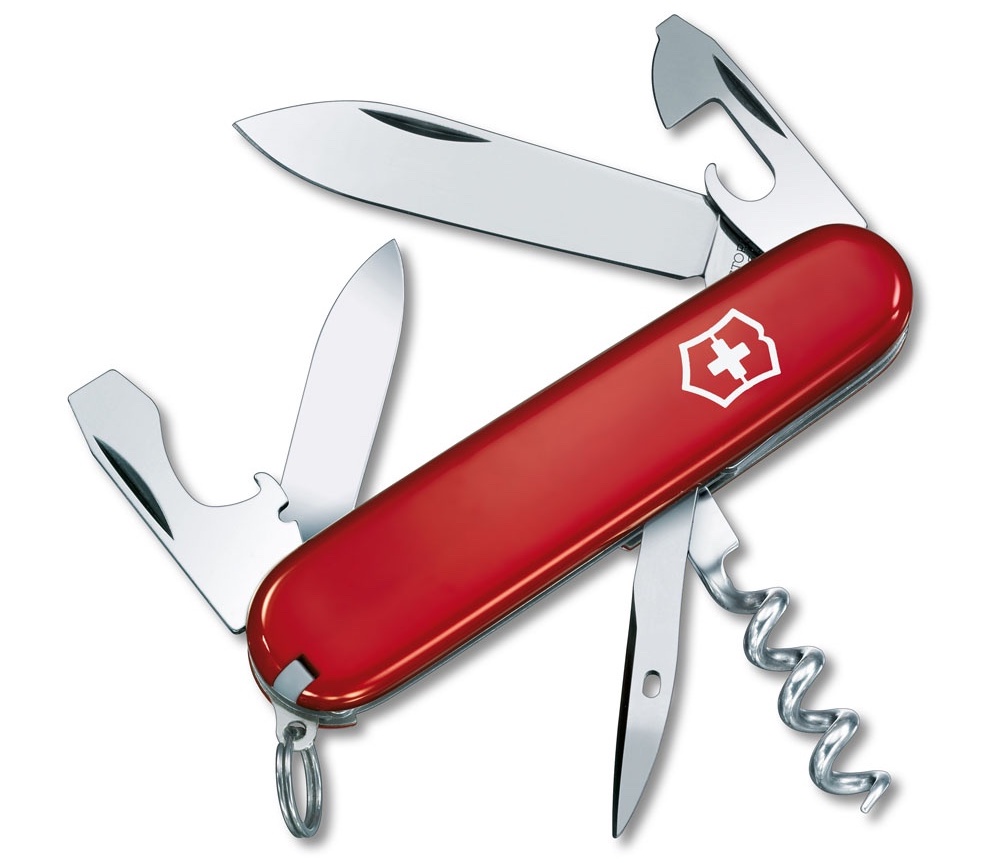 As SAKWiki puts it, the Spartan is probably the most common and best-known 91mm SAK. It is essentially a modern version of the original officer’s knife from 1897. With a large and small blade, cap lifter and can opener, and awl and corkscrew, the Spartan is pretty much a base model of the 91mm SAK. 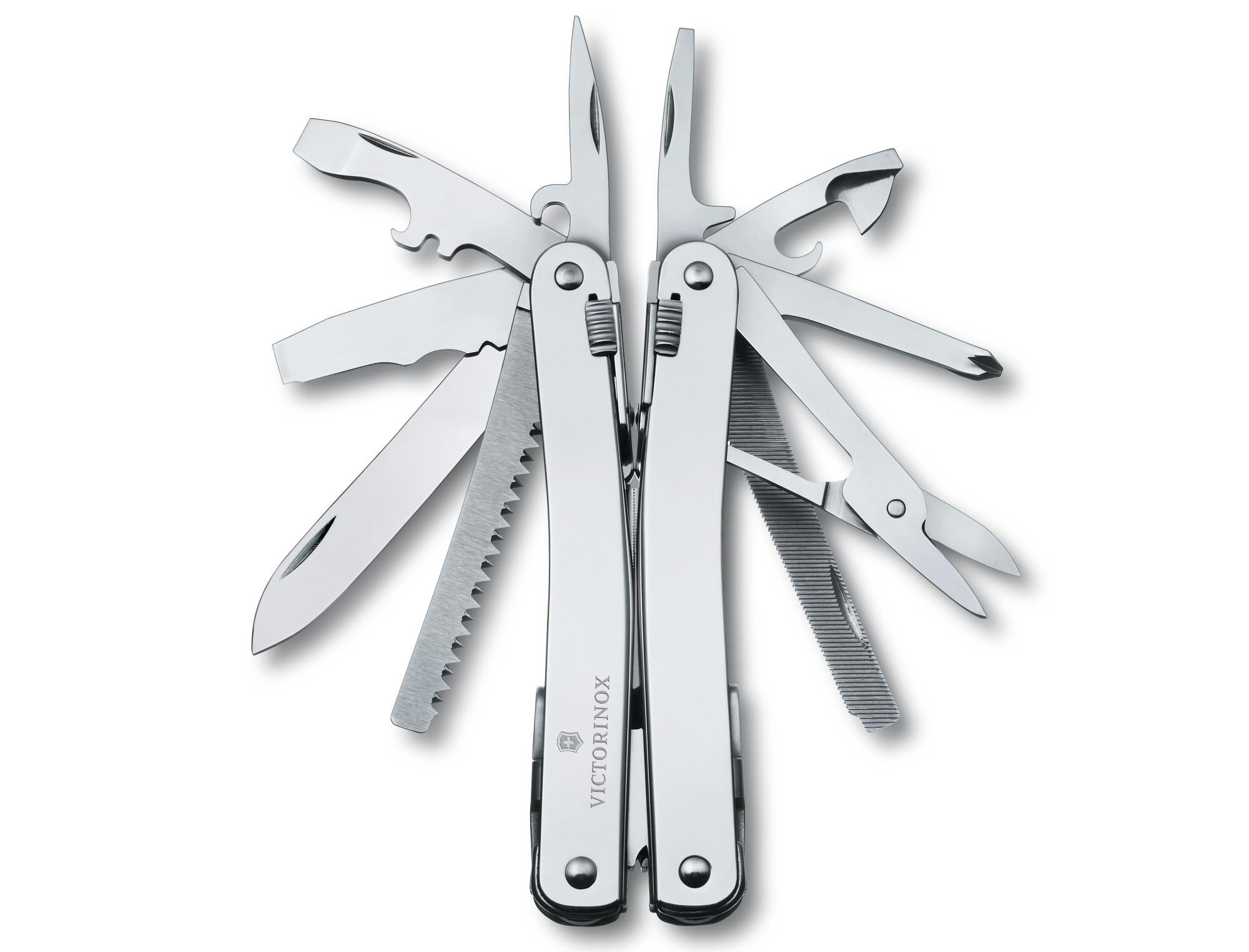 In the 1990s, Victorinox wanted to get into the multitool plier game with the SwissTool. The SwissTool competes directly with Leatherman, which is typically superior in this area, but the SwissTool was a great first start. Over the years, Victorinox spent some time making the tool better, and they eventually released the SwissTool Spirit, a smaller and some say better version.

The Spirit has a more ergonomic design with 26 functions. It is one of the best reviewed products from the brand though there is a distinct faction of those who prefer SwissTools and those who prefer Leathermans. 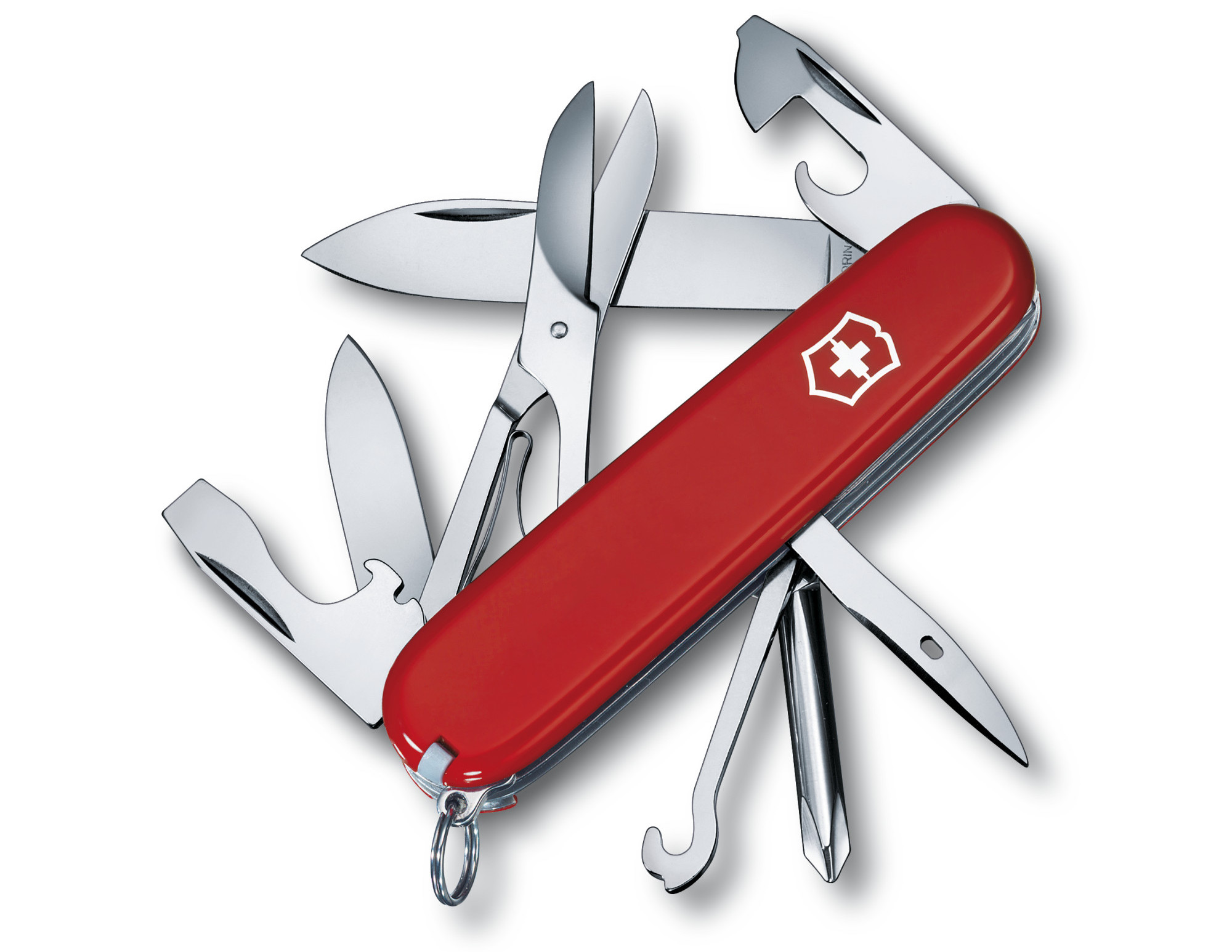 I originally had the Tinker on this list but it is the same exact knife as the Spartan but with a screwdriver instead of a corkscrew. Instead the Super Tinker offers more tools that are better suited for a Tinkerer.

It has all the same tools as the standard Tinker but with a hook and scissors.  You can also go all the way and get a Deluxe Tinker with pliers. 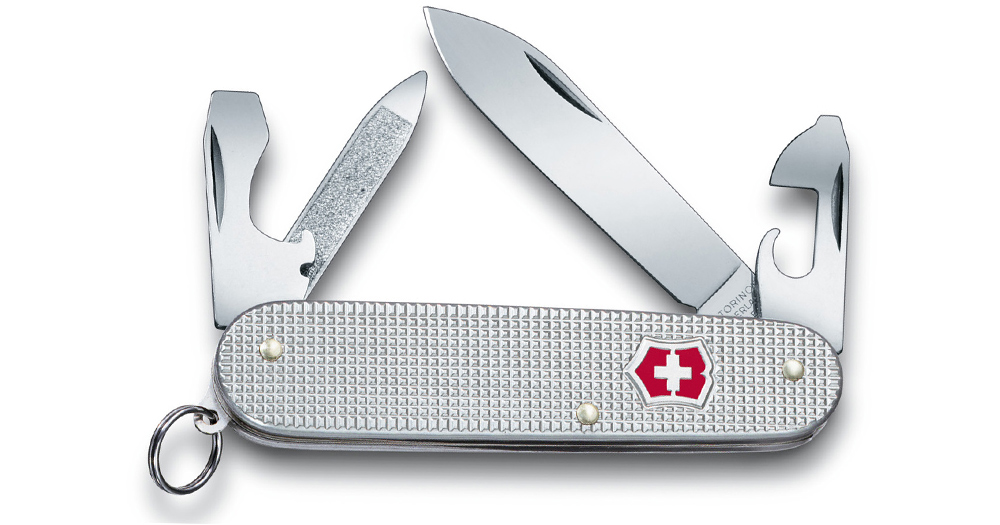 The Cadet is a fan favorite mostly because it’s a small knife with a good toolset and Alox scales. Because it has Alox scales, it doesn’t have the tweezers or toothpick (hopefully SAK can figure out a way to add those one day).

This a knife knife enthusiasts will carry along with a standard pocket knife quite often. 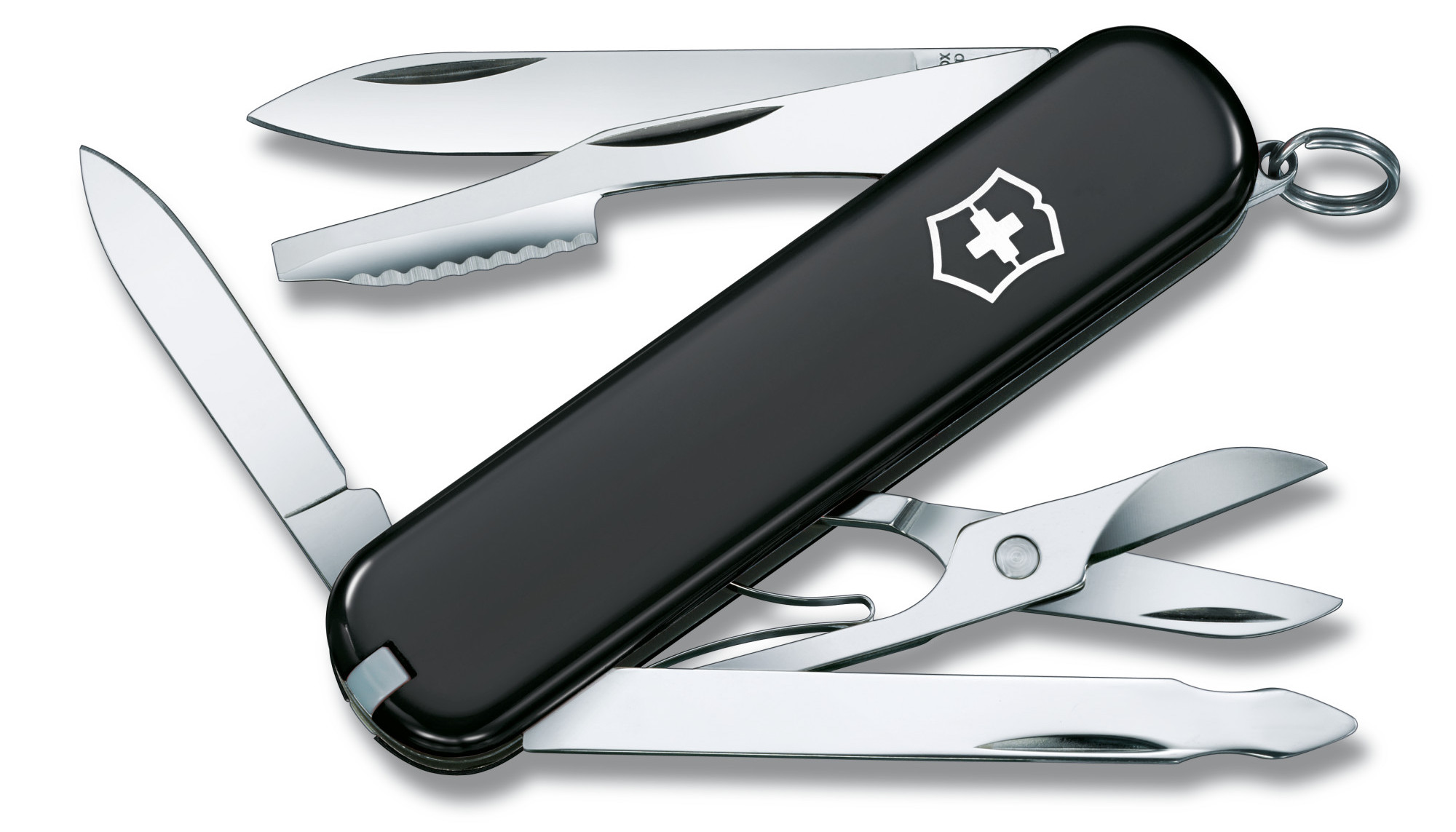 This one is by far the most surprising addition to the list. Why? It has the smallest selection of unique tools than any other SAK. The Executive is designed more for office use and comes with a few different tools, such as an orange peeler blade and nail cleaner.

There are also the classic tools like scissors, two blades, toothpick, tweezers, and screwdrivers. The Executive remains pretty popular and well-reviewed across the internet. 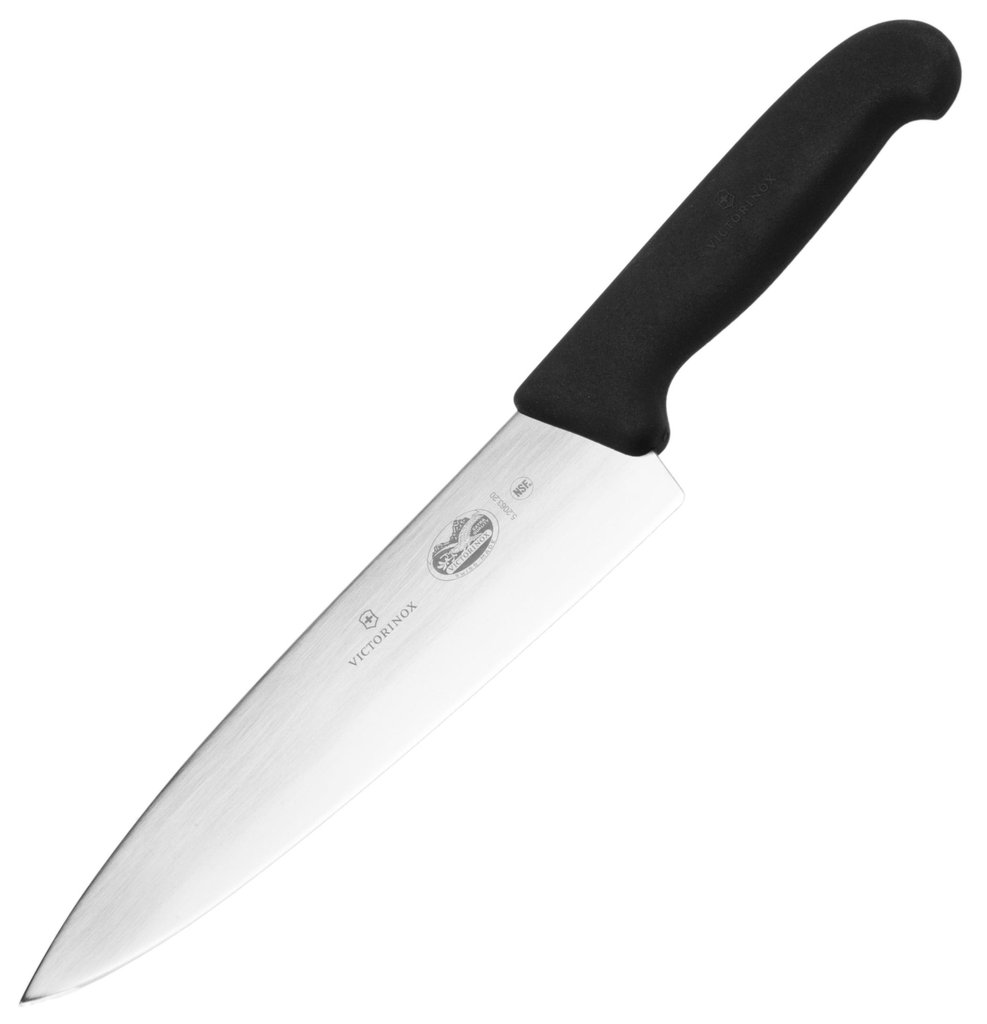 Although this isn’t a Swiss Army Knife, the Fibrox Chef’s Knife is one of the best Victorinox has to offer. I use this in my kitchen literally several times a day and it’s held up nicely. The size, weight, price, and construction are perfect for kitchen use.

It also frequently gets a nod from chefs everywhere who recommend a functional and budget friendly all-around kitchen knife.