Anatomy of a Knife: 10 Key terms every knife enthusiast should know

When describing the basic parts of a knife, the terms seem pretty simple. You have the blade and the handle. It’s when you start talking to knife experts that terms like quillon and choil made you feel completely uneducated. So, whether you’re interested in talking to some of the big boys in the knife industry or simply want to learn more about knives, these are some key terms every knife lover should know. 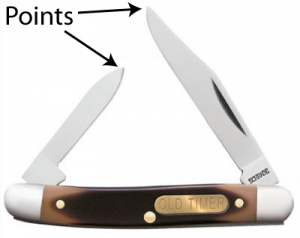 Tip or Point: We’ll start at the, well… tip. This is the very top of the blade, which is also known as the point. The tip is a part of the knife that has various styles and designs. For example, some points are Tanto points, clip points, spear points and many more. If you want more details on the full range of blade shapes and variations at the tip, I encourage you check out Jay Fisher’s educational post.

Spine: The spine is the widest part of the actual blade and is also known as the back.

Edge: This is the thinnest part of the knife and, therefore, the sharpest. The edge is also sometimes designated the cutting edge to distinguish it from false edges, which are unsharpened. Generally, when someone mentions the edge, they mean the cutting edge. 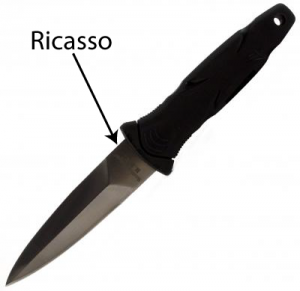 Grind: The part of the knife between the spine and the cutting edge is known as the grind.

Ricasso: When your blade thickens before going into the handle, it’s called the ricasso. It’s that unsharpened part of your edge between the grind and the handle.

Bolster: Knives with bolsters sometimes have two: a front bolster and a rear bolster. These reinforce the knife in critical areas. It’s the thick part of the knife blade that transitions into the handle. It’s usually smooth and found typically on forged knives. 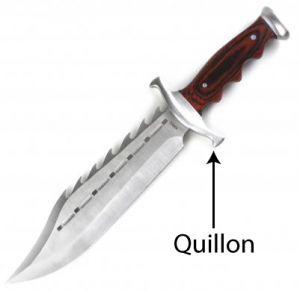 Quillon: The actual definition of this term has evolved over the years, but in modern usage, it generally is used to mean the protrusions that stop your fingers from sliding forward onto the blade. This is sometimes separated into front quillons and rear quillons to mean either the protrusion stopping the hand from going into the blade or off the heel of the handle.

Choil: This is usually the indented front of the edge at the start of the blade.

Tang: A tang is the portion of the knife that extends down into the handle, either hidden underneath it or sandwiches between the handle material. There are full tangs, push tangs and other types.

Butt: Finally, you have the butt, which is exactly what it sounds like. This is the bottom or rear end of the knife. In this area, you could have things like a rear bolster or pommel.

For images and full descriptions of these terms and terms not mentioned here, I highly recommend Jay Fisher’s complete page on the anatomy of a knife. https://credit-n.ru/potreb-kredit.html

Georgia passes 'most important knife bill of the year'