Using a knife for self-defense is a bad idea.

Let me get that out of the way. By writing this post, I’m getting into pretty controversial territory. Many people, both trained and amateurs, insist that a knife should never be used for self-defense unless you’ve undergone intensive training. Even so, you might want to avoid whipping out a knife at all costs.

A knife is messy and requires you to get extremely close to your aggressor, making you more vulnerable and giving them the ability to take your weapon away. Knife defense can be fatal to your aggressor, leaving you with potential jail time and a traumatic experience haunting your dreams.

On top of that, folding knives often don’t make the best self-defense tools anyway because they are more susceptible to breakage and require more focus for engagement.

But all this doesn’t stop companies from making self-defense knives.

Any knife can conceivably be used for self-defense. As long as it’s sharp, you can do some damage, but these are created with one purpose in mind. Sure, you could possibly use a few of these to open packages, but these not something you’d carry for everyday use.

So with all the disclaimers out of the way and with the knowledge that self-defense knives may not always be the best idea unless you’re in a dire situation with your life on the line (of if you’re being attacked by a rabid dog), here are 10 folding knives designed specifically for self-defense. 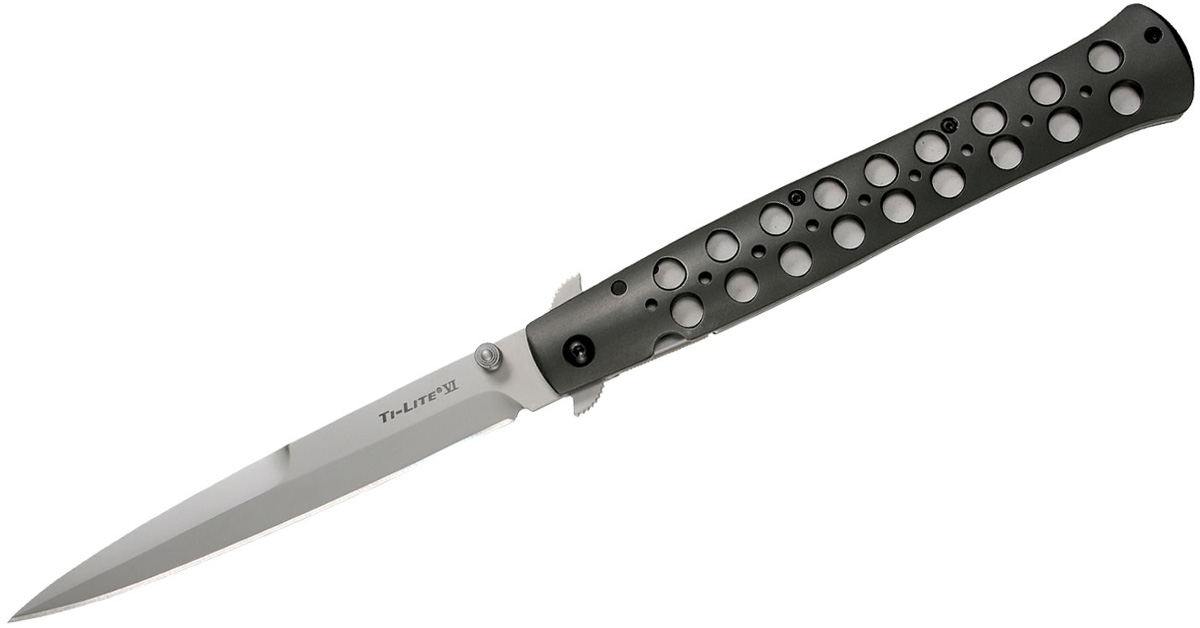 Let’s kick things off with the first of many Cold Steel knives on this list: the Cold Steel Ti-Lite. The Ti-Lite is a throwback design that’s meant to look like the switchblades prevalent in the 1950s. The knife has a long spear-point blade profile that’s optimal for piercing.

It comes in a few sizes, but the one we’re talking about here is the Ti-Lite 6, which features a massive 6-inch blade. At this size, the knife is not good for much else except for self-defense. It might even be too big.

However, the Ti-Lite has a big feature seen in many of these knives—the ability to open in one swift movement out of the pocket. The quillon can snag the pocket as it’s being pulled out before the blade is locked in place. This knife can be out and ready to intimidate in a moment’s notice. 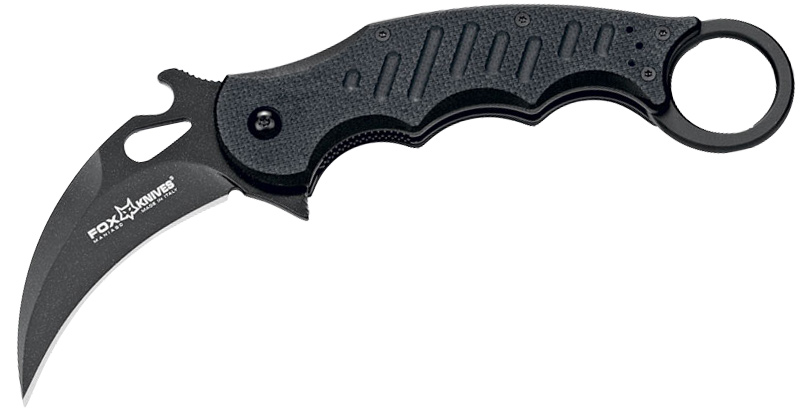 Next up on this list is the Fox Folding Karambit.

The truth is that all karambits can be on this list since karambits are ancient defensive tools. They aren’t the most useful tools for things other than self-defense. However, this one has a few tricks up its sleeve.

The Fox Folding Karambit features a 3.14-inch blade with textured G-10 handle scales. It has a liner lock mechanism that keeps the blade engaged and the knife has a subdued appearance thanks to a black blade coating. The karambit design includes the traditional ring, which allows for different types of grips. 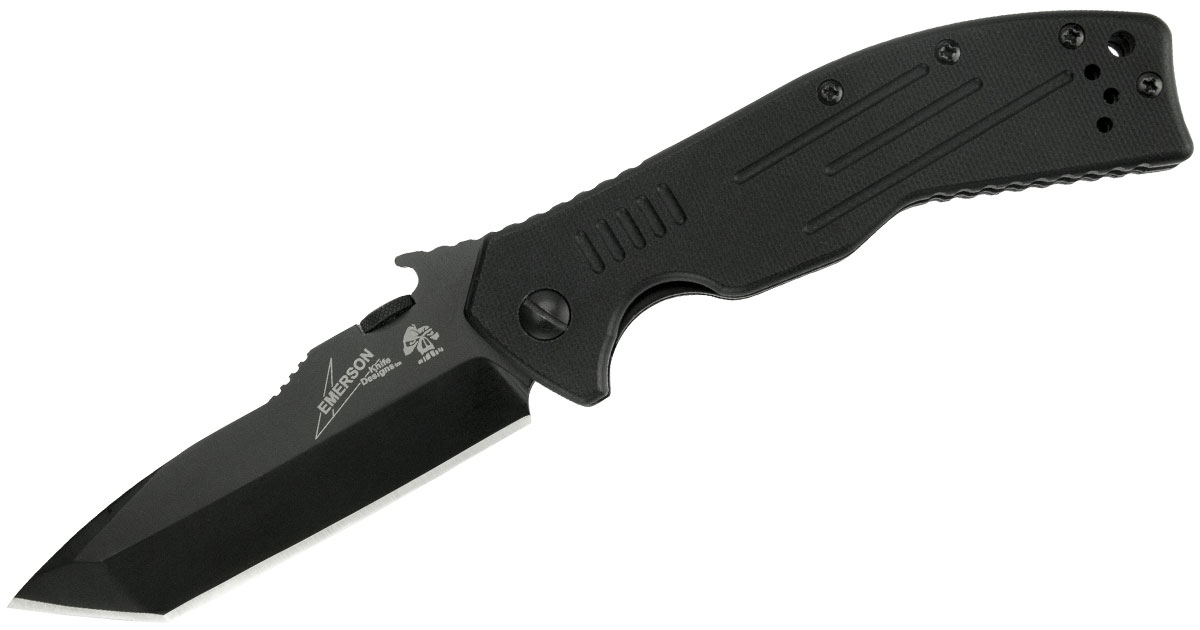 Ernest Emerson is one of the fathers of the tactical knife and just about every knife he makes is designed for combat. If you had to pick just one Emerson to carry for self-defense, make it the CQC-7. CQC stands for close-quarters combat, and that’s where this knife excels.

The knife boasts a modified tanto point that’s excellent for slashing and piercing. Black G-10 handle scales offer a secure grip, and the model’s been updated to include the Emerson Wave feature. That means you can open it in one swift motion. You see that type of function on many knives these days (such as the Ti-Lite above), but the Wave was the first and arguably the best.

According to the Emerson site, the CQC-7 has become the most sought after folding knife of all time. Luckily for you, Emerson teamed up with Kershaw to bring a more affordable version of the knife. But if you’re really going for self-defense, the Kershaw Emerson CQC-8K is an even larger version. It’s just as good. 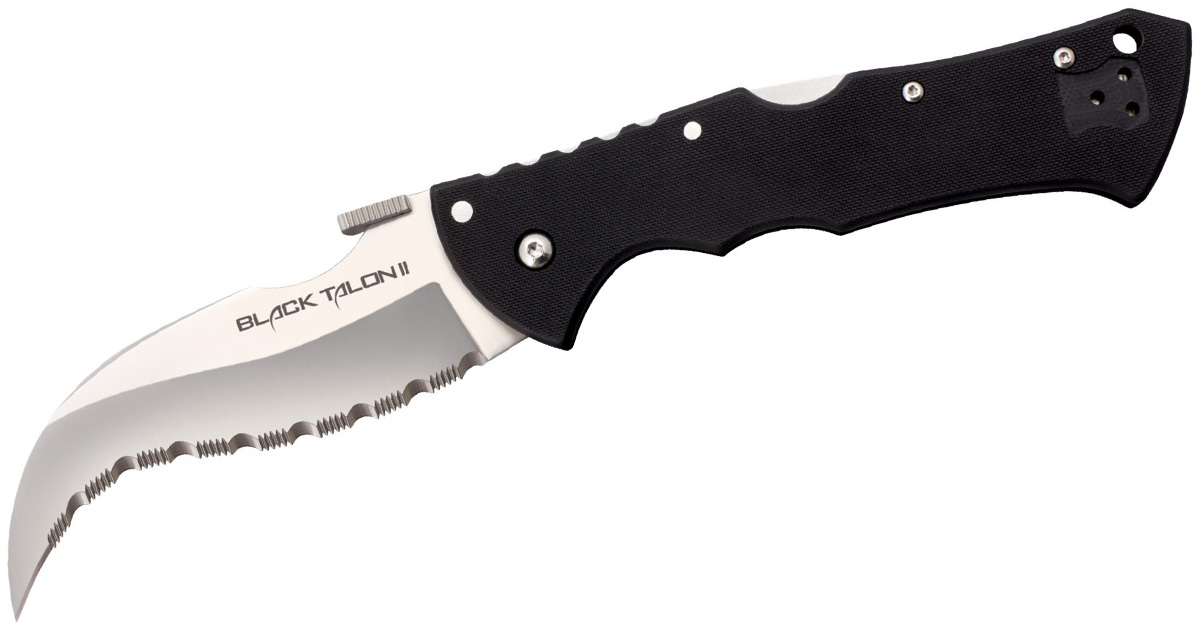 Cold Steel is well known for making knives specifically made for self-defense. In an earlier version of this post, the Cold Steel Hold Out I was on this list, but that has since been discontinued unfortunately. The Black Talon II takes its place, however, and it’s no slouch in the ferocity department.

The Black Talon II has a long 4-inch hawkbill blade with the Tri-Ad lock and an opening disk that allows for engagement in one swift motion. This knife is based off a design that’s featured later on this list, but this knife is cheaper and some say more durable. 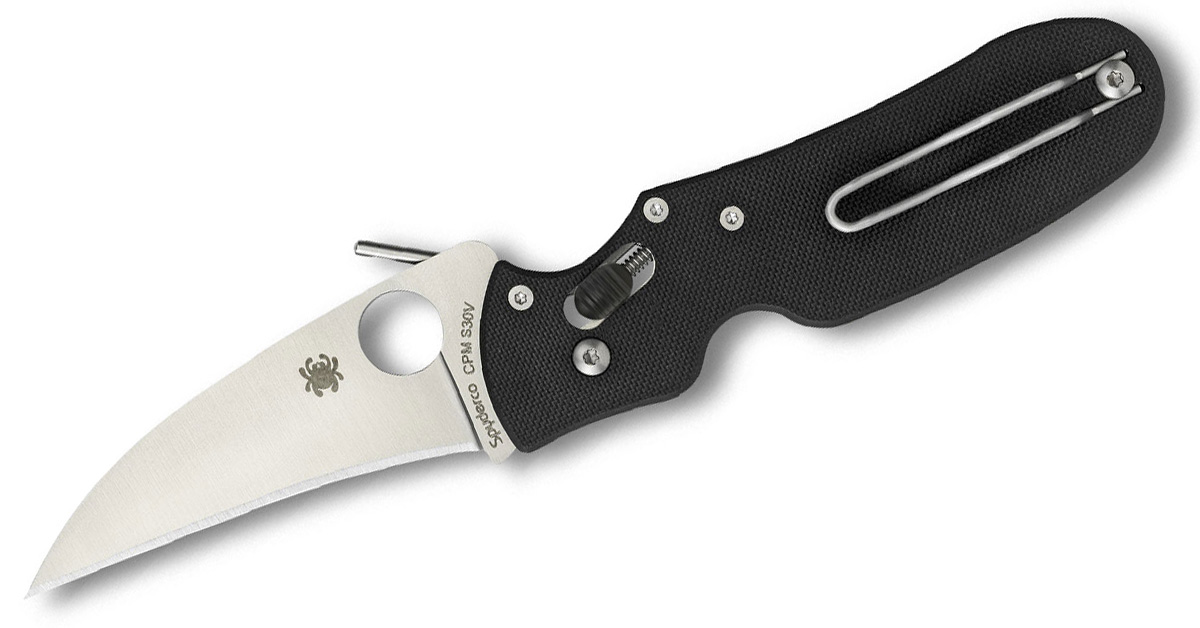 Yet another knife designed by someone with a background in self-defense and martial arts is the Spyderco P’Kal. Michael Janich has been teaching and studying self-defense and all its facets for more than 35 years. He’s used that knowledge to create a few knives for Spyderco, including the P’Kal.

The name is taken from the term “pakal,” which is an icepick grip that’s comfortable and easy to wield. It has a 3.19-inch blade made from S30V stainless steel and uses a ball-bearing lock to stay open. Black G-10 handle scales make it easy to keep a grip, even if your palms are covered in sweat.

This knife also incorporates an Emerson Wave feature—with a twist. It’s more of a metal bar and can be removed if you don’t want it. Overall, this is widely called one of the best self-defense folders on the market. You can pick up a P’Kal trainer to get in some practice so you can get in some reps. 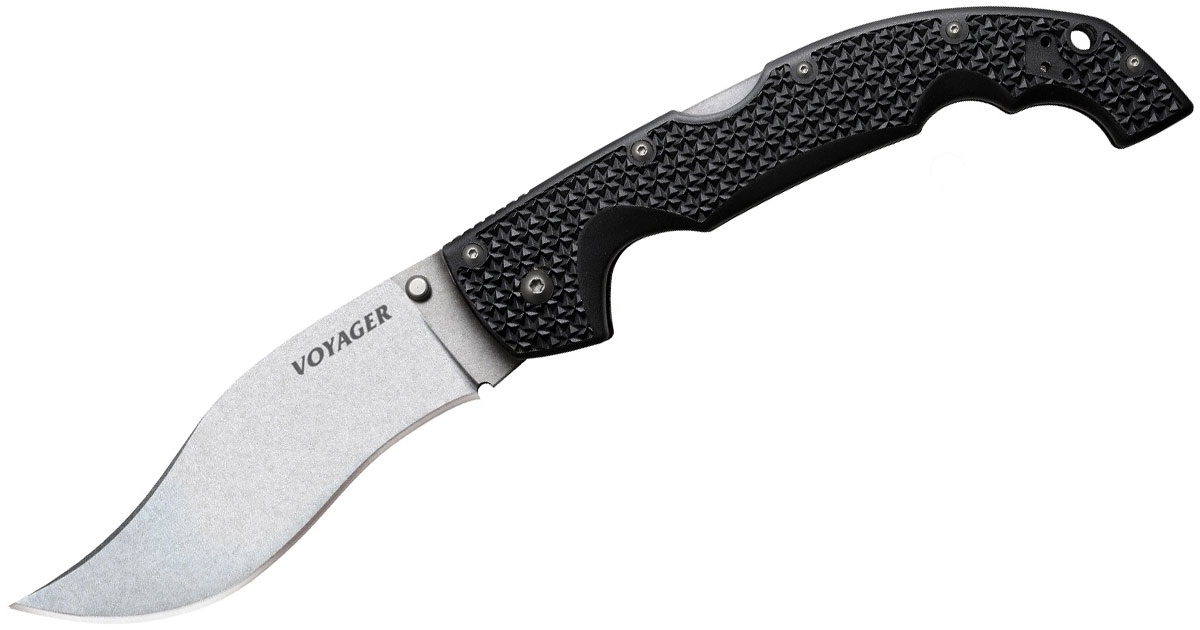 If you have poor bladder control, you may want to avoid the Cold Steel Voyager Vaquero XL because it has the tendency to make people wet themselves when they see this beast. This huge knife boasts a curvaceous 5.5-inch blade made from Carpenter BD1 Alloy with a stonewashed finish.

Its intimidation factor is off the chart. This isn’t the kind of knife you take out to peel some apples on the porch or cut a piece of twine out in public. It is made for slashing and stabbing and overall destruction, which is why this knife makes this list. 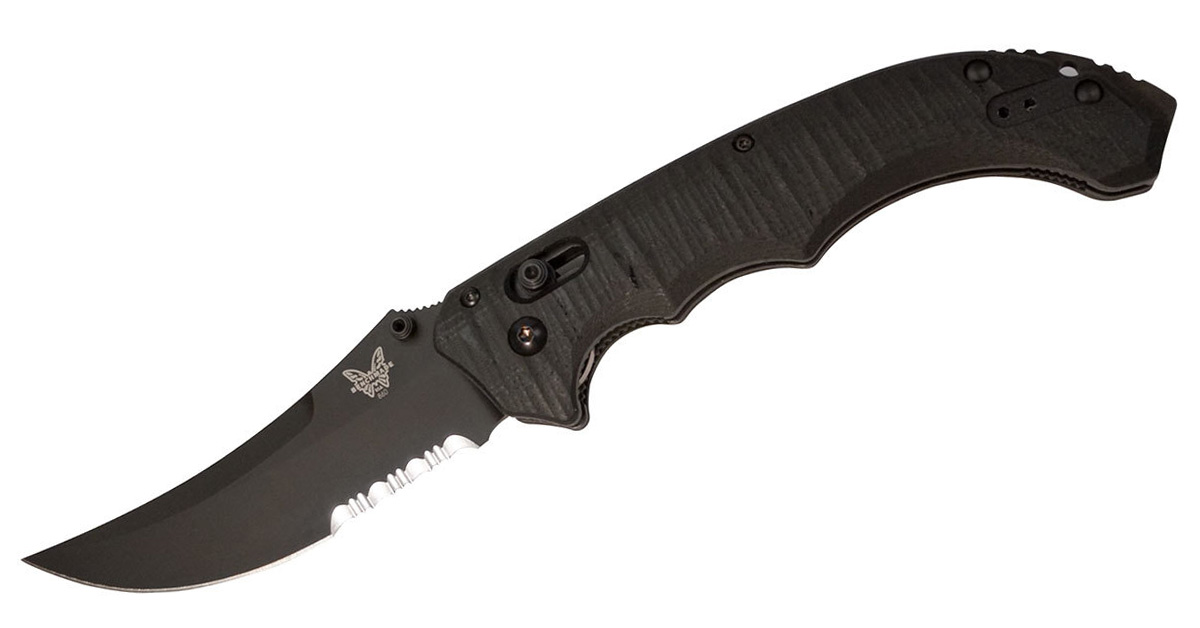 The only Benchmade to make this list is the Bedlam. It’s aptly named because when there’s total bedlam, this is the knife you want around.

This knife takes design cues from the scimitar, a curved short sword made for slashing enemies. These were often used by security forces to kings. Benchmade took that sentiment and injected it into the wicked Bedlam. It has a curved 4-inch blade made from 154CM stainless steel with a prominent swedge for increased piercing ability. You can pick it up in a partially serrated edge or plain edge. This version also is an automatic knife for quick and effortless access.

The ergonomics on the G-10 handle scales are outstanding and natural. The best part is that it uses Benchmade’s reliable AXIS locking mechanism. 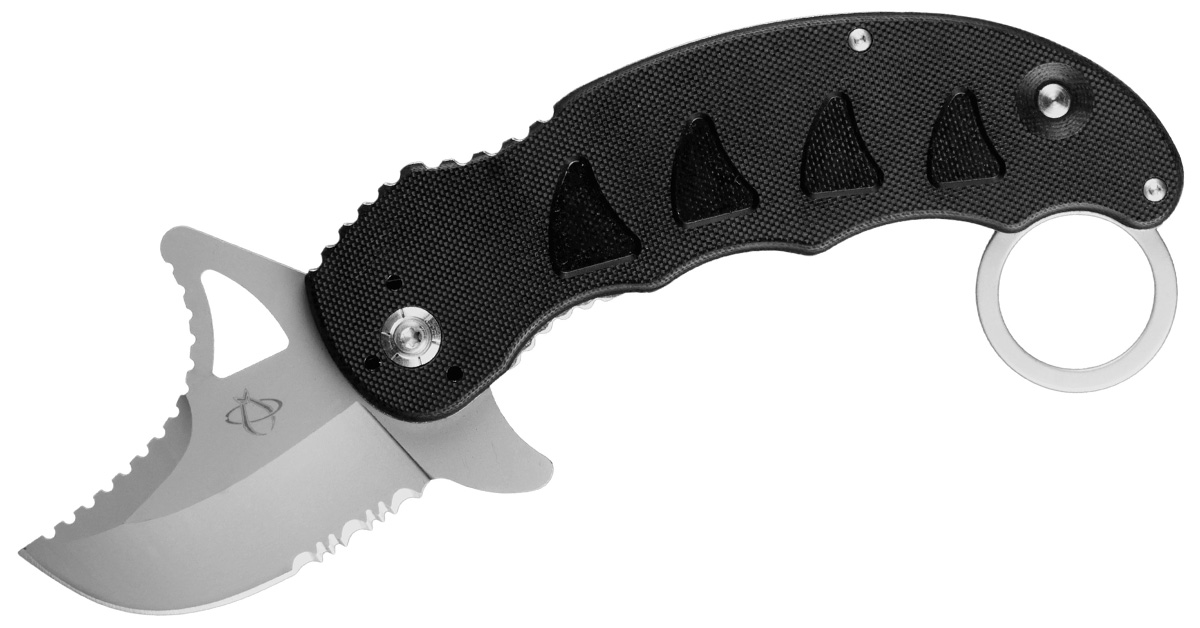 While many of the knives on this list get some bonus points for their intimidation factor, the Mantis Snaggletooth is quite goofy-looking. That doesn’t mean it can’t protect you from an attack.

The Snaggletooth is designed by Morgan Thomas with some inspiration taken from the self-defense instructor Bram Frank. This knife is actually a combat knife, despite its bizarre look. The great thing about this knife is you can use it to disarm an aggressor without even opening the blade. Using the Bramp (the protrusion designed by Bram Frank), you can take down aggressors and even open the knife on their skin if things escalate. It even has a spring-loaded finger ring to turn it into a karambit at a second’s notice.

With a 2.75-inch blade, it’s smaller than most of the knives on this list, but it will get the job done with some proper training. 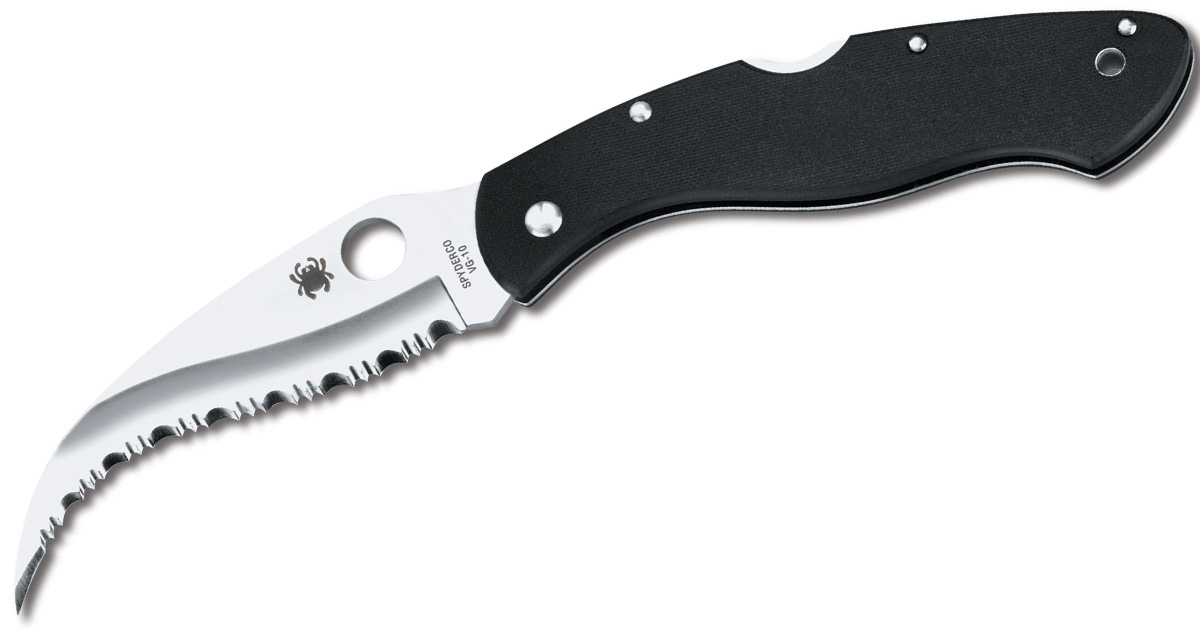 These last two knives are similar to one another but are often touted as the best self-defense knives for anyone.

In the 90s, a law enforcement branch reached out to Spyderco to create a weapon of last resort for its undercover agents who may not have had much training. The result was the Civilian.

It has a long 4.125-inch blade with a reverse “S” shape that acts as a sort of claw. A full SpyderEdge blade does maximum damage. While the tip is quite vulnerable, it doesn’t really matter in extreme self-defense situations. If you have to whip this out for your safety, chances are you aren’t going to care about the knife.

This knife is highly specialized and comes in limited quantities. 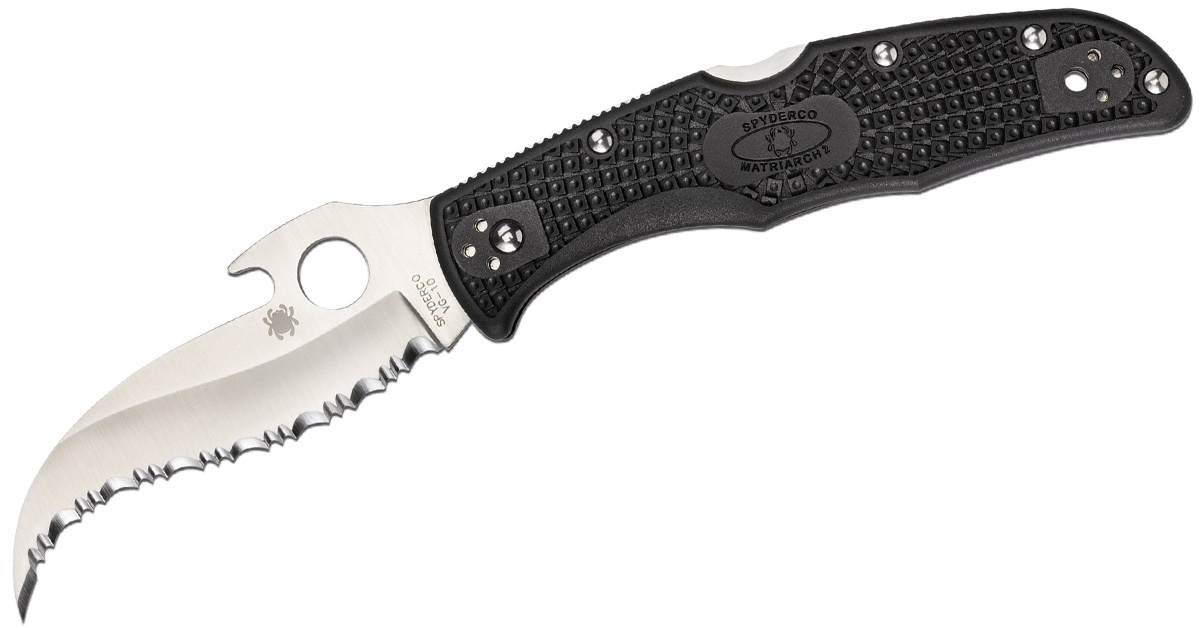 Then, of course, there’s the highly popular Matriarch 2. When you ask people about the best self-defense knife on the market, nearly everyone will point to this knife.

It takes many of the design cues from the Civilian but with a few important changes. The first is that the blade is a smaller 3.5 inches. This shorter blade makes the tip less susceptible to breakage. It retains the same wicked SpderEdge.

This version of the Matriarch 2 features the Emerson Wave feature, meaning you can open this knife easily and quickly in intense situations.

On top of that, the bi-directional textured FRN handle for a reliable grip and a lighter weight. When things get dangerous and you need a knife of last resort, you won’t regret reaching for the Matriarch 2.

Learn More from our Blog

Boker Plus Rhino – Badass Knife of the Week