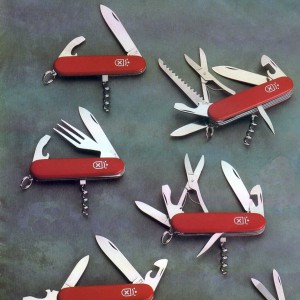 The San Francisco Chronicle recently ran an interesting profile on life-long knife sharpener and knife expert Eric. E. Weiss.  Weiss, 55, has been sharpening knives since he was five-years-old.  He currently earns a living by sharpening approximately 35-40 knives per day, at $8-10 per knife.

Weiss mans a booth at the Berkely Farmer’s Market three days a week and still sharpens knives by hand.  He told The Chronicle that he uses four natural stones while sharpening: soft Arkansas, medium Arkanas, red Indian and ceramic, in addition to six grades of industrial diamondstones as sharpening material.

Like many knife experts, Weiss is critical of using dishwashers to clean knives, which he calls his “No. 1 nemsis”.

People seem to think that any knife can be put in a dishwasher. But in fact it’s like sandblasting your car in order to clean it. The knife is banging against the basket, getting chips, nicks, dents, dings. And if the knife has any sort of quality steel to it, the dishwasher can remove the edge in two, three washings.

In the profile, Weiss also attempted to clear up the often repeated myth that a sharp knife is more dangerous than a dull one.

When he’s not sharpening blades, Weiss said that he is an avid reader of knife history, from tactical knives to survival knives to hunting knives.