One of the last samurai sword makers holds to tradition 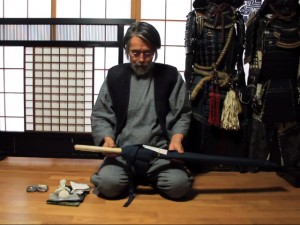 With the amazing advances in technology, it’s hard not to lament the skill and craftsmanship required of people long ago. Few of us still know how to build fires from nature, develop film, memorize telephone numbers or do thousands of basic tasks we might have had to do just a decade ago. Fortunately, there are those that keep traditions alive by preserving its most fundamental purpose.

It could probably be put more elegantly, but mass production ain’t got nothing on Korehira Watanabe. Watanabe is one of the remaining few Japanese sword makers in the world who creates koto swords through traditional methods. The most amazing part is that there are no longer blueprints or how-tos on what Watanabe is accomplishing. When the samurai died, most of their secrets of swordmaking died with them. However, Watanabe claims that he has come to the closest to replicating the truly mythical samurai sword.

He has been working on swords for the past 40 years, quietly and consistently practicing his craft in order to create the best possible weapon. He trains a disciple in hopes that his passion and method of traditional swordmaking is not lost. He also feels that people often update methods to conform to newer technology, but it loses so much of the enthusiasm and rituals of the past.

This guy deserves a Check out this remarkable video of a master at work.