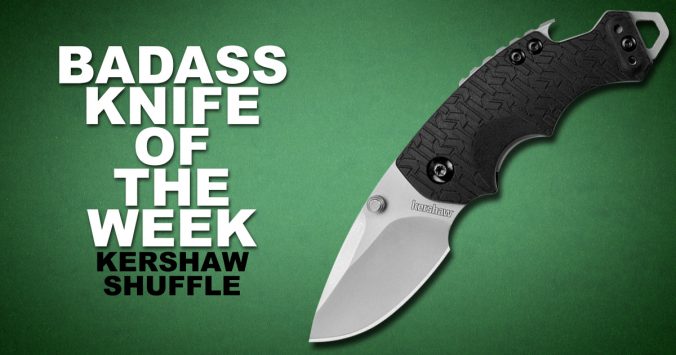 A knife that tries to do more than cut things often ends up being a master of none. However, the latest Badass Knife of the Week proves a knife can serve multiple functions without sacrificing its core purpose.

The Kershaw Shuffle is a compact, versatile, and inexpensive folding knife with a few bonus tools that integrate seamlessly into the overall design.

The 2.4-inch blade is the highlight of the knife. Featuring 8Cr13MoV steel with a bead-blasted finish, the blade opens up manually with dual thumb studs and stays engaged with a liner lock.

A swedge on top of the blade helps increase its penetrating and slicing capabilities while the finger choil gives this small knife a more secure grip in hand.

Speaking of a more secure grip, the Shuffle was one of the first knives to feature the K-Texture handle, which is made of glass-filled nylon with a repeating pattern of the Kershaw “k” logo.

Kershaw could have called it a day at that point but decided to put in a bottle opener with a protruding portion of the backspacer. There’s also a flathead screwdriver that doubles as a lanyard attachment. A deep carry pocket clip also makes carrying this knife no issue.

It’s hard to beat this little folder in value and functionality. It’s no surprise the Shuffle has been a perennial favorite among Kershaw’s knives since it was introduced in 2013.

It also comes in various colors and blade shapes, including Lime Green.

For more info on this Badass Knife of the Week, see the product page for the Kershaw Shuffle.