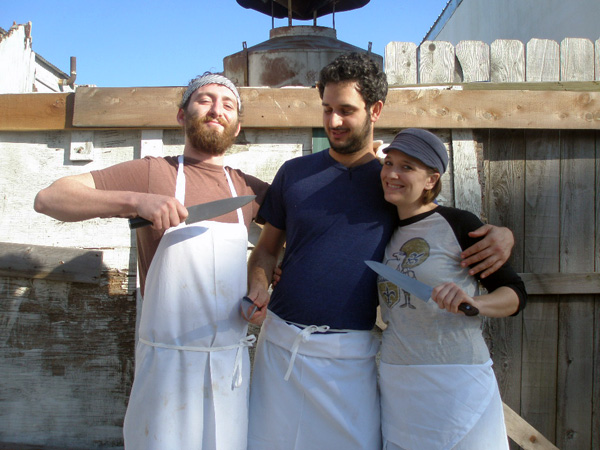 This is the first installment of The Cutting Edge’s new article series: Hot Kitchens, Hot Knives! Cooks and foodies almost love geeking out about their knives as much as they love food (and at times, even moreso!), so we’ll be sitting down with chefs, kitchen crews, and bloggers all across the world to ask them about their knife collections and the culinary workhorses that they know and love. Check out this series every Tuesday if you want to find out what kind of heat the guys and gals in the kitchen are packing in their knife rolls.

Though they’re 1,305 miles away from the Big Apple, the crew at Pizza Delicious in New Orleans, LA slings the most faithfully New York-style pizzas this side of the Mason-Dixon. The crew at Pizza D is the new hotness in the New Orleans food scene, and legions of ex-New Yorkers and Confederate deserters have embraced their super sexy pies, homemade pasta, and garlic knots. You can read about their favorite knives below the jump.

Soleil Ho: How large are your kitchen knife collections?

Greg Augarten, co-owner of Pizza Delicious: I actually just have one knife, a Henckels, which my girlfriend Kelsey got me two years ago. I know that Mike Friedman, [the other co-owner], has a Global and a Misono that he uses in the kitchen.

Matt Bossie, cook: Hold on, I’ve got to count… I have 4 chef’s knives, 2 paring knives, and a utility knife. Some Victorinox knives, some Wusthofs. My collections have been stolen twice so far, so I’ve been slowly building it up again.

Kelly Pickett, cook: I must have at least 10 knives in different shapes and sizes. They’re mostly Japanese-made, but I have a few utility knives from my CIA (Culinary Institute of America) days.

SH: What was your first real-deal kitchen knife?

GA: The one Kelsey got me. Before, I just used whatever was around. [Laughs]

MB: My first was a Wusthof Classic 8″ Chef’s knife, which I got ten years ago at the CIA. It was a standard culinary school issue knife. Just kind of a piece of crap knife.

KP: I got my first knife from the CIA, too. It was so bulky and awkward — I think most American-made knives are. The knife was too thick and heavy for me, and I discovered that I really prefer lighter blades.

SH: What qualities do you look for in your kitchen knives?

GA: I like a heavier knife, so I can really feel it when I use it. A good knife is one I can bear down on. Does that sounds manly enough?

MB: My favorite knife is a Japanese-style one, with an ergonomic wood handle. It’s got a one-sided blade and is made from softer metal, so it’s easier to sharpen. It also keeps its edge for way longer than a German-made knife.

KP: As soon as I could afford it, I got my 6″ Shun Santoku knife. Since my hands are kind of on the small size, I really like its shorter blade, which rocks nicely. Also, it’s made with folded steel so it stays sharp. I also really like my 8″ Kikuichi, which is on the longer, thinner, and lighter side. Kikuichi is a Japanese, family-run knifemaker that used to make samurai swords thousands of years ago, so those same qualities are in their culinary knives.