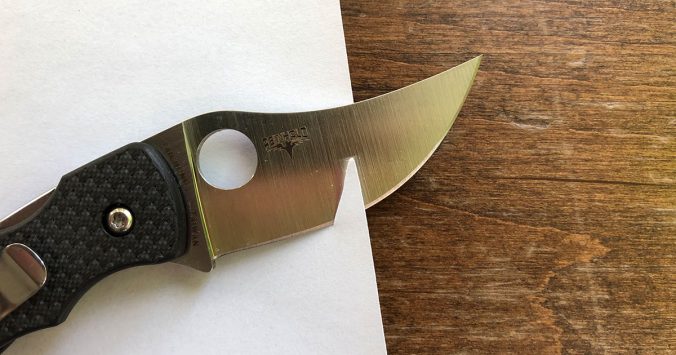 This post has been updated since it was first posted in August 2012.

The vast majority of people can’t tell a dull knife from a sharp knife. People automatically assume that if a knife can cut, it’s sharp.

Unfortunately, that’s not always the case.

A dull knife will usually cut, but it requires much more force and energy than if you’re cutting with a truly sharp knife. So how can you tell if a knife is truly sharp? Here are a few ways to determine the sharpness of a blade.

Let us know your sharpness tests in the comments.

Probably the most tried and true method is the good ol’ fashioned paper test. Grab a piece of paper, hold it between your fingers, and slide the knife downward. If it’s sharp, it will cleanly and easily slice the paper with just the weight of the knife. If it’s dull, it will usually be ragged or slip right off. This test also allows you to find any jagged or missed spots if you cut the whole length of the edge on a single stroke.

For an even better test of a blade’s sharpness, use a piece of magazine paper. Paper from a magazine is exceptionally thin and slick, which makes it even more difficult for a knife to slice through. According to Mike Vellekamp (who used to work at Spyderco before his current venture of V Nives), Sal Glesser used to make them use paper from National Geographic magazines. Phone book paper is an even tougher test, and  toilet paper is the toughest.

Yet another variation fo the paper test is to fold the paper in half so it has a rounded edge. Cut the paper along the rounded edge and if it’s sharp, it will catch and cut the page.

Here’s a good clip from the legendary Bob Kramer on the paper test.

If you’ve ever watched knife reviews on YouTube, you’re probably familiar with the next test. It involves running the knife along your hair (usually your arm hair) and watching the little hairs get lopped off as the blade comes gliding through. Any hairs that fold under will indicate that the blade is not up to snuff.

Note that you shouldn’t have to touch the skin to get the hair to pop right off.

Arm shaving test shown by H. Clay Aalders from the old The Truth About Knives site

This is where the term “shaving sharp” comes from. Unfortunately, it can leave an awkward hairless patch on your arm. Not to mention the fact that you will eventually run out of arm hair to shave and may have to move on to other parts of your body. I’ll leave it up to your imagination.

For more advanced users, those who can actually split a piece of hair like the following person knows they have a sharp blade on their hands.

When you can whittle a hair a few times, it’s even more impressive.

I’m not entirely sure about the real-world practicality of whittling hair sharp, but it looks so good and satisfying to see it performed.

Although the tomato test is usually aimed at kitchen knives, it’s actually a good test for any knife. All you have to do is get a tomato, rest the knife on top and pull back without applying pressure. If the knife slides through the tomato without any downward force, it’s sharp.

What makes the tomato such a ripe fruit for testing is that they are notoriously difficult to cut thanks to their tough flesh but soft insides. If you use a dull knife on a tomato, it will get crushed by the pressure. A sharp knife will be able to cut through the skin and insides without smashing the fruit. However, tomatoes do vary widely. Here’s a good demonstration in this YouTube video from 1:27 to 1:48.

An onion is another great food item to test sharpness on because the skin is so slippery that a dull knife will slide off while a sharp knife will dig right in. 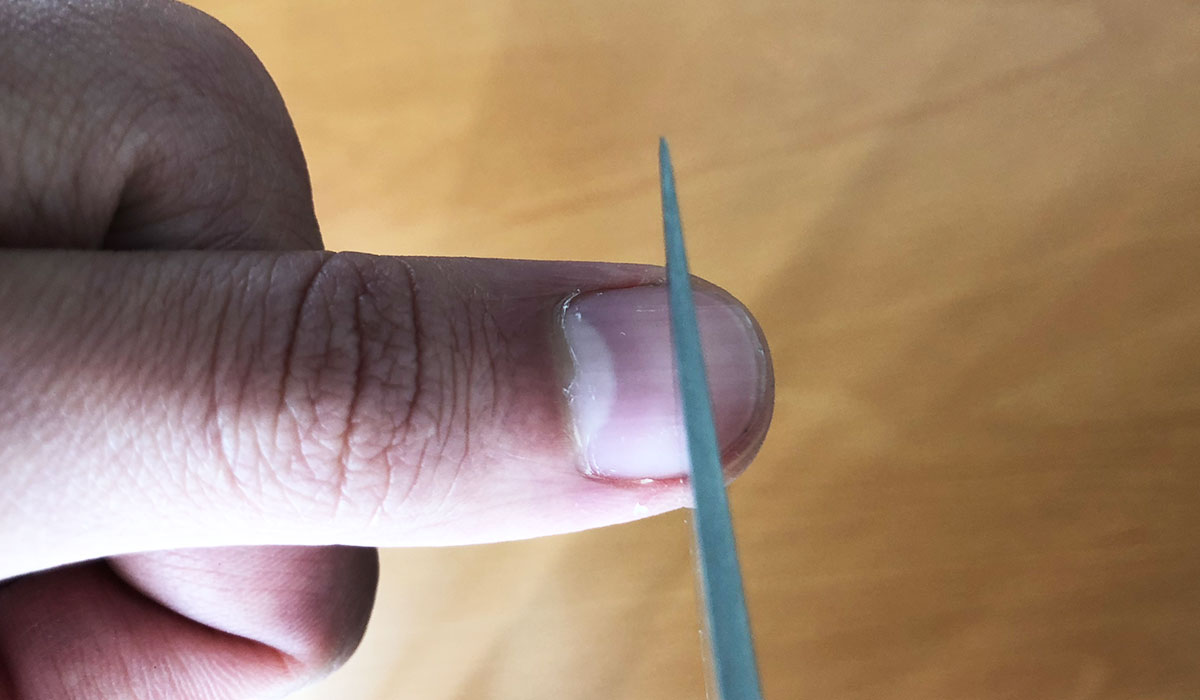 A fingernail is a hard, protective covering made of alpha-keratin. It’s also a good option for testing the sharpness. People do this a few ways. A common method is to take the edge of the blade and rest it across your thumbnail. It should catch along the nail and not be able to move. You shouldn’t have to apply any pressure for the edge to catch on your nail. If it’s able to slide around, then it’s dull. It’s not always 100 percent accurate because a super sharp knife can still slip.

Another variation is to actually shave the calcium off your nail (or at least that’s what Vellekamp calls it). I just tried it with a sharp Kershaw Leek and it worked like a charm.

Murray Carter is a master Bladesmith who knows a thing or two about making knives. To test the sharpness of his blades, he uses something called the Three Finger Test. Here it is:

Wait, is he running his fingers along the sharpened edge of the knife? Yes. This method requires practice, knowledge, and careful consideration. By applying some light pressure on a sharpened blade without moving around, you can feel the sharpness of an edge without being bitten as we say in knife parlance.

You don’t slide your fingers unless the blade is dull and you only apply as much pressure as you feel your fingers can take. Mike Vellekamp does a variation where he places his thumb on the knife and tries to move it back and forth. If it catches and doesn’t move, he deems it sharp.

This test is controversial because of the potential danger, though with practice you can tell the different stages of knife sharpness. Some prefer a smoother edge than a toothier edge, so it may not catch as well.

There are nuanced discussions about the safety and effectiveness of this test over at BladeForums. 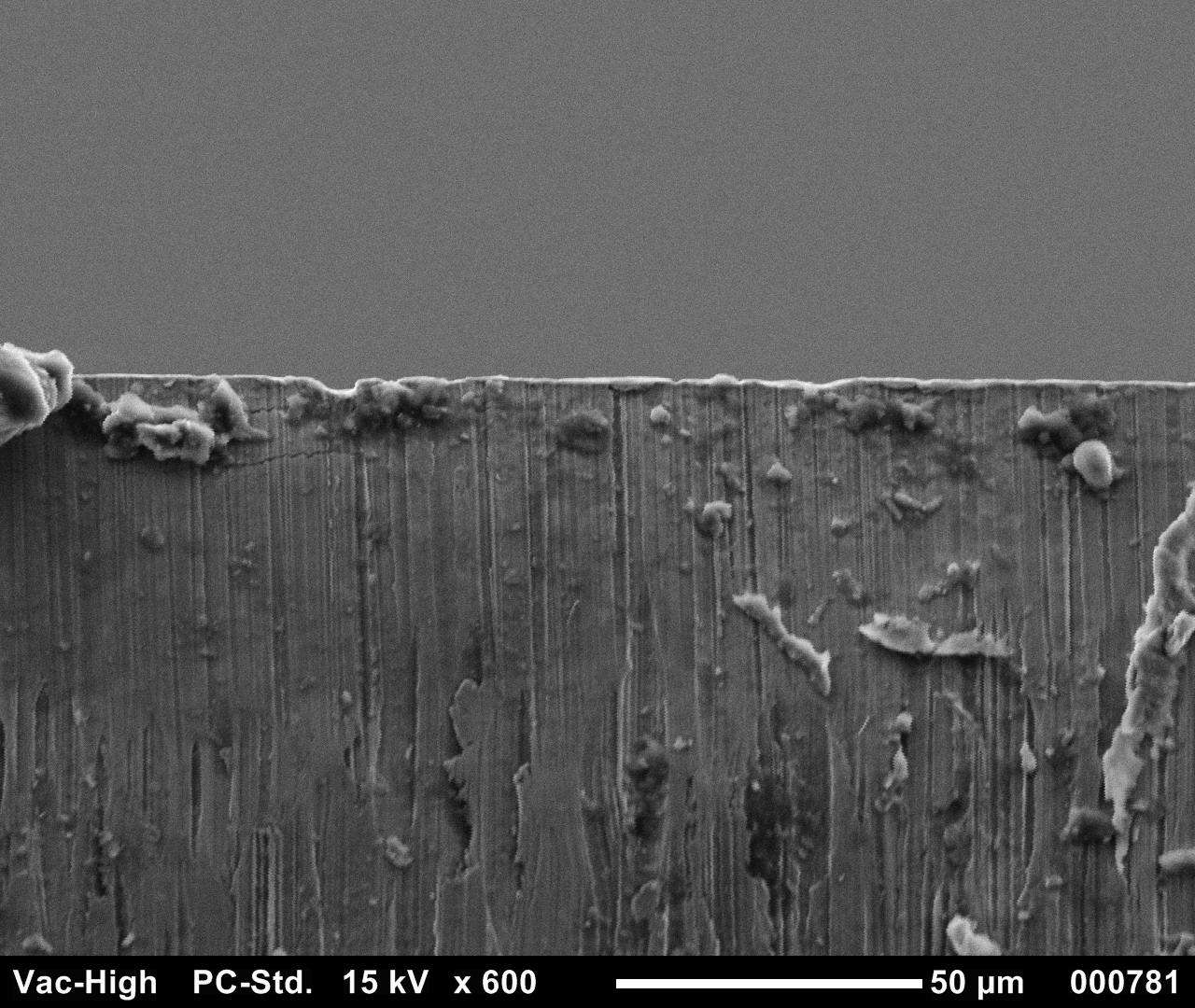 Image of a sharp edge from chefsteps.com

I was tempted to call this one the eye test, but that would be a misnomer since the naked eye can’t see all the complexities of a sharpened edge. To truly see whether an edge is sharpened, you need some help. People use various microscopes to look at the edge.

Using a microscope and sufficient lighting, you can actually see the fine details of the edge and see whether there is a burr or any imperfections. One of the best ways to visually see the sharpness of a blade is through a scanning electron microscope. These can go for several thousand dollars though.

Take a look at some blades observed through a scanning electron microscope here and here.

If you can’t afford to drop that much money, you can pick up a jewelers loupe for pretty cheap. When you use that with a light, you can get a better idea of the quality of your knife’s edge. More than anything you will be able to see imperfections in the edge like chips or rolls.

To be honest, I have no idea if this is an actual test or if he’s just messing with us. I have never tried this and have no intention of trying it because I would really know what I’m looking for and absolutely do not want to cut my tongue. Looking through Google and BladeForums only turned up some joking tongue sharpness tests. But if this is something you actually do, let me know in the comments.

Also, don’t try this at home.