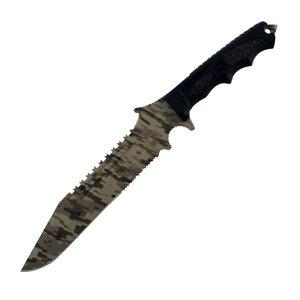 A pocket knife is adequate for a number of outdoor tasks, but if you’re a bona fide survivalist, a serious hunter or a Rambo-enthusiast, you’ll want a bigger, burlier, survival blade. Here’s a look at how the survival knife changed over history and what it represents today.

The survival knife has likely existed in some form for thousands of years. When German hikers discovered Otzi the Iceman, Europe’s oldest mummy, he had a flint knife in tow.  He likely used that knife to skin animals, start fires, build shelters and defend himself from everything from bears to human attackers.

It’s difficult to imagine a historic figure manlier than Jim Bowie. Whether he was operating as a backwoods pirate in the swamps of Louisiana or slaying Mexicans with his back to the wall at the Alamo, Bowie was one of the toughest knife-wielding renegades of the 19th century and a key contributor to the legacy of the survival knife.

In 1930, Bowie designed the most famous version of his Bowie Knife, a monstrous 9.5-inch blade similar to a butcher knife.  The knife blade curved at the end, making it especially apt for skinning dead animals; its straighter section was ideal for chopping or cutting smaller items.

However, the most infamous use of the Bowie knife was combat.  In 1827, Bowie was a principal at a duel, later termed the sandbar incident, that ended in him being attacked and shot. Bowie defended himself with his Bowie knife, disemboweling one man and nearly slicing off the arm of another.