The Sawblade Slingshot: Too far or not far enough? 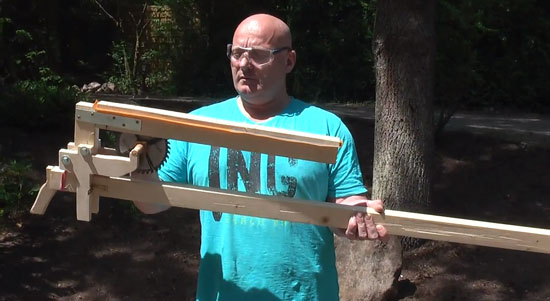 From the man who brought you the utterly insane machete slingshot comes his next crazy creation: a slingshot that shoots circular sawblades.

Jörg Sprave, the self-proclaimed Mr. Slingshot, usually designs a bunch of wacky slingshots, including one that shoots wooden stakes in the event of a vampire invasion and the slingshot of mass destruction.

However, it seems he outdid himself with his newest creation. In Gizmodo, he was quoted describing the difficulties of shooting circular sawblades:

END_OF_DOCUMENT_TOKEN_TO_BE_REPLACED

The Machete Slingshot: Crazy or Awesome? 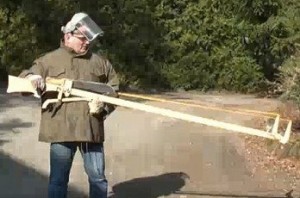 Are you tired of those regular kids slingshots that only shoot tiny pellets? If so, one slingshot enthusiast has the thing for you: a slingshot that shoots machetes.

While some are criticizing this cool contraption as dangerous and impractical, others are praising it as the weapon of choice in the event of an inevitable Zombie Apocalypse. Since it probably doesn’t have any real use, zombie decapitation is most likely all it’s good for.

Although I don’t recommend you create one of these weapons for obvious reasons (i.e. machete in the face), it is surprisingly easy to build. All Sprave did was construct a sort of wooden crossbow/rifle about six-feet long, and on one end put two reinforced points to hold the band. On the other end, he put a notch for the machete to rest and a lever to lift it up over the notch. He used an old crossbow rubber band and placed it on an incision he made in the blade to propel the machete.