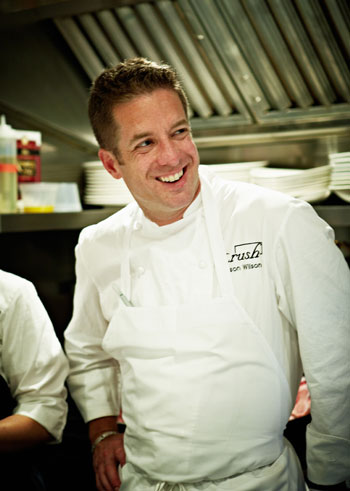 This is the fourth installment of The Cutting Edge’s new article series: Hot Kitchens, Hot Knives! Cooks and foodies almost love geeking out about their knives as much as they love food (and at times, even moreso!), so we’ll be sitting down with chefs, kitchen crews, and bloggers all across the world to ask them about their knife collections and the culinary workhorses that they know and love. Check out this series every Tuesday if you want to find out what kind of heat the guys and gals in the kitchen are packing in their knife rolls.

With 20 years of globetrotting and culinary experience under his belt, Chef Jason Wilson has the kind of insight into kitchen knives that few possess. Since its opening in 2005, Wilson’s restaurant, Crush, has earned him accolade after accolade from the James Beard Foundation, Food & Wine magazine, and others for his commitment to high-quality ingredients and the inventive and whimsical ways in which he and his team make them all work together. If you’re ever in Seattle, stop by Crush just to check out Wilson’s Bacon and Eggs dish, an orgasmic combination of local meat with smoked Steelhead salmon roe, bourbon maple syrup, and parsnip flan.

We’ve got Chef Wilson’s kitchen knife insights, which alternate between straightforward and downright mystical (in an awesome way), after the jump! END_OF_DOCUMENT_TOKEN_TO_BE_REPLACED